Keith has recorded with a few of his own projects – and is featured as a sideman on numerous  recordings. Check out the list below for some highlights. 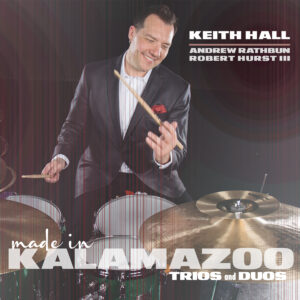 Debut album as a leader!

“There can be few jazz trios on the circuit today who play with this level of musicianship…”
-Classicalsource.com

STARING INTO THE SUN

TRI-FI releases their 5th recording with a new batch of originals while exploring
some new directions.
4 Stars from DOWNBEAT Magazine!

Released in 2011, this is the 3rd album from TRI-FI. Fun music and excellent recording quality on this one. The drums were in the big room! Boom! I hope you’ll check it out! 100% original music by the three of us.

This album is made up of entirely original material, most of which was written specifically for this recording. We hope you enjoy it! SPECIAL GUEST: STEVE WILSON!

After playing together for a few years as the touring band with Curtis Stigers they decided to create this album of their own music. It’s an experiment that  turned out even better than they hoped. They even had Curtis come and sing a tune with them- the one standard on the CD. Special guest: CURTIS STIGERS!

Recordings as a Sideman

Take What You Want but Don''t Touch My Herring Shoes